Building Bee Resilience, One Queen At A Time 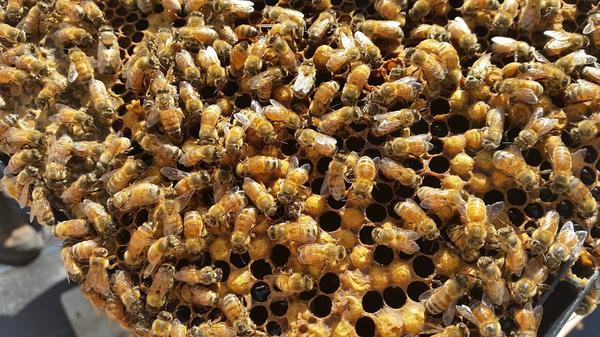 Listen to the full recording here.

Honey bees have been having a tough time lately. Pests and disease have plagued many hives, killing off the pollinators and forcing people looking to save the bees to get creative.

One scientist in Connecticut is now pinning his hopes on bee genes — tracking down honey bee “survivors” in the hopes of spreading their hearty DNA.

If you ever read Where’s Waldo?, you’d relate to Richard Cowles as he worked with bees.

“I call it, ‘Where’s Wanda?’” said Cowles, a scientist with the Connecticut Agricultural Experiment Station, during a recent visit to Lockwood Farm in Hamden.

As he held a frame full of busy female worker bees up to the sun, Cowles was looking for their master — the queen. It was an early step in what promises to be a months-long experiment — one Cowles hopes will ultimately breed stronger bees.

“What I am trying to do,” Cowles said, “is to find as many different sources of bees that have strong hygienic traits — good survival traits — bring them together, and then have controlled mating.”

To do that, he ordered queen bees from around the country and New England — places like Vermont and Massachusetts. They’re honey bees with “superior genetics” Cowles said may make them better able to shake off pests and disease.

But before those new queens can go into the hive, the old ones need to come out. After a few minutes of searching, research assistant Ellie Clark spotted the elusive queen, “Wanda.” 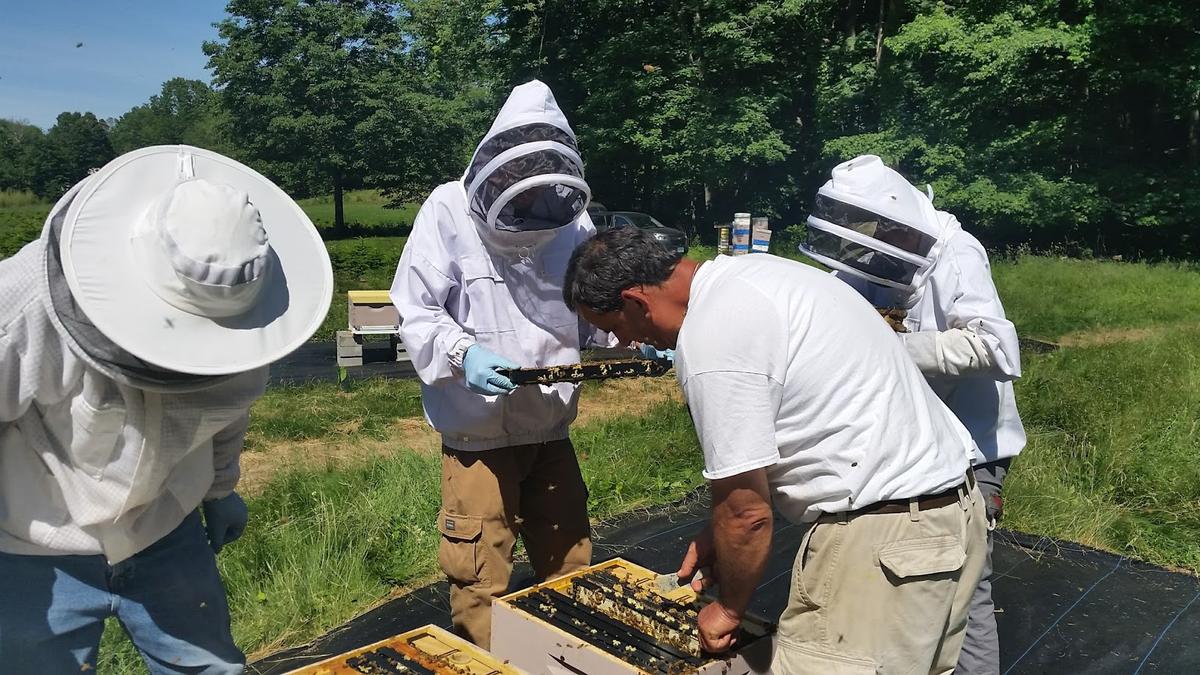 Lately, bees like Queen Wanda have been trouble. State bee inspector Mark Creighton said about half of the hives in Connecticut didn’t survive the winter — and that’s happened for the past three years.

“Some areas had significant losses, and others fared very well,” Creighton said. “Those in the drought regions — especially those that just came out of drought — they didn’t have a chance to put on adequate food reserves at the end of last year.”

Then, there’s the varroa mite. Creighton said this parasite is the number one killer of bees in Connecticut. It feeds on bees, can cripple their newborns, and spreads disease, which honey bees can pass on to other pollinators at shared flowers.

“They impact our native bees,” Creighton said. “And we want to keep all our bees healthy — not just our Apis mellifera.” 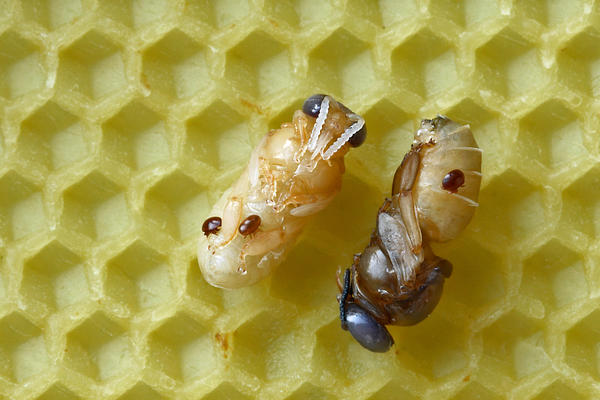 Some of the new queens of Apis mellifera — that’s the scientific name for honey bees — Cowles will place in the hives are specifically bred for their resilience to varroa. But he said shaking up hive leadership is a delicate process.

“You can’t just let her go, or they’d immediately surround her — and they’d do what’s called ‘balling’ her, which means to form a mass that will heat up the insides to lethal temperature and kill her,” Cowles said.

So a queen actually gets placed into her new hive in a tiny protective box. That allows her smell to mesmerize her subjects slowly — until the workers accept her.

Which means next summer, he’ll take his new virgin queens and cross their DNA with the harvested semen of lots of new male drones.

The harvest has an unhappy ending.

“There’s a weird process,” Cowles said. “You make him buzz a whole lot. And here’s the sad part. Now, let’s see if I have the technique down. I was getting pretty good at it. You gotta start from the front of the abdomen and work your way back and, hopefully, all of a sudden, it’ll go ‘pop!’”

Cowles worked the bee between his fingers, simulating what would happen to a male drone while mating with a queen. I’ll spare you the details, but his technique worked. 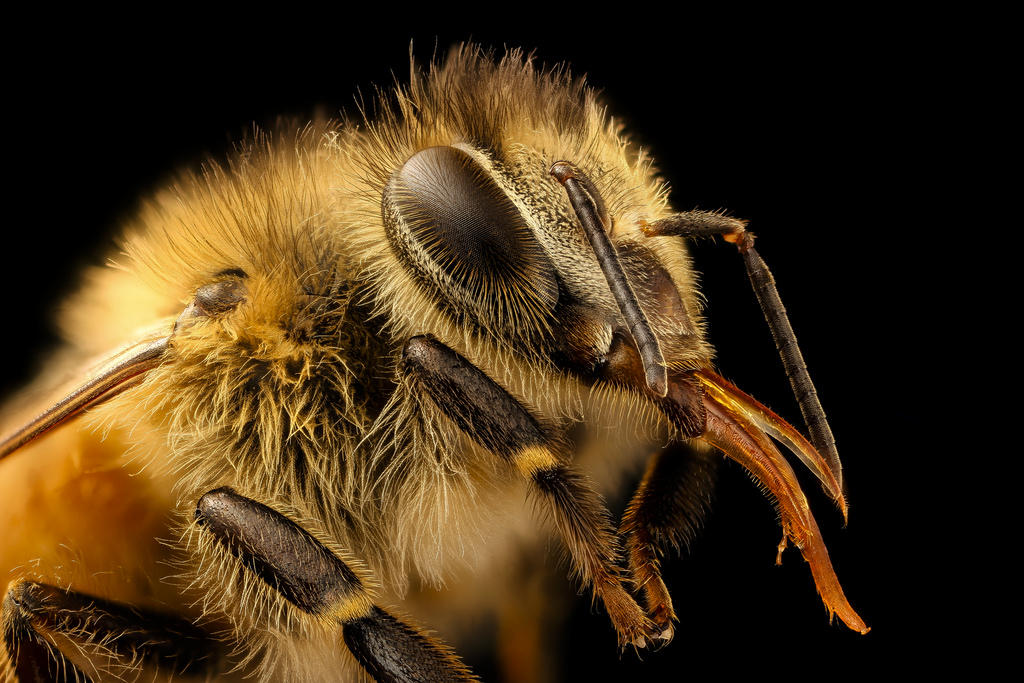 For every queen Cowles inseminates in the lab, he said he’ll need about 15 or 20 drones. And he’ll have to keep track of them all, to avoid inbreeding.

From there, Cowles will share his specially-bred bees with beekeepers in the state to see how well they survive. One hope, he said, is that the project raises awareness of the importance of acquiring well-bred bees.

“Ultimately, it’s not only for the beekeepers, and for improved survival of honey bees, but it’s also to improve the overall pollinator health in the state,” he said.

Cowles and state bee inspector Creighton said they also hope to incorporate feral populations of honey bees into their breeding program, purposefully working in one more pool of strong genes — which will, hopefully, yield stronger bees.